My greatest fear about the future is not of technology running out of control or posing existential risks to humankind. Rather, my greatest fear is that, in the year 2045, I will be 58 years old and already marked by notable signs of senescence, sitting at the kitchen table, drinking my morning coffee, and wondering, “What happened to that Singularity we were promised by now? Why did it not come to pass? Why does the world of 2045 look pretty much like the world of 2013, with only a few cosmetic differences?” My greatest fear is that, as I stare into that mug of coffee, I would recognize that it will all be downhill from there, especially as “kids these days” would pay no more attention to technological progress and life-extension possibilities than their predecessors did. My greatest fear is that they would consider me a quixotic old man, fantasizing about a future that never was, while they struggle to make ends meet in an ever-more hostile economy (which would look much like our own, except farther along in the sequence of gradual decay, because nobody cares), strangled by labyrinthine restrictions arising out of Luddism and change-aversion within the widespread society. In short, my greatest fear is that our present will be our future, except that I and the present generation of longevity activists will lose our youthful vitality and will ourselves be rapidly approaching the abyss of oblivion.

So I needed to do something. I am not a doctor or biologist, but I did vow at the age of five that I would devote my life to the struggle against senescence and death – so I needed to make good on that promise. My articles, videos, and occasional donations to life-extension endeavors are all well and good, but I also wanted to make a unique contribution that could turn the tide of cultural attitudes toward life extension and toward death itself. After years of brainstorming and months of concerted activity on the part of both me and my wife and illustrator Wendy Stolyarov, the result is Death is Wrong – an illustrated children’s book on life extension that is the first of its kind. 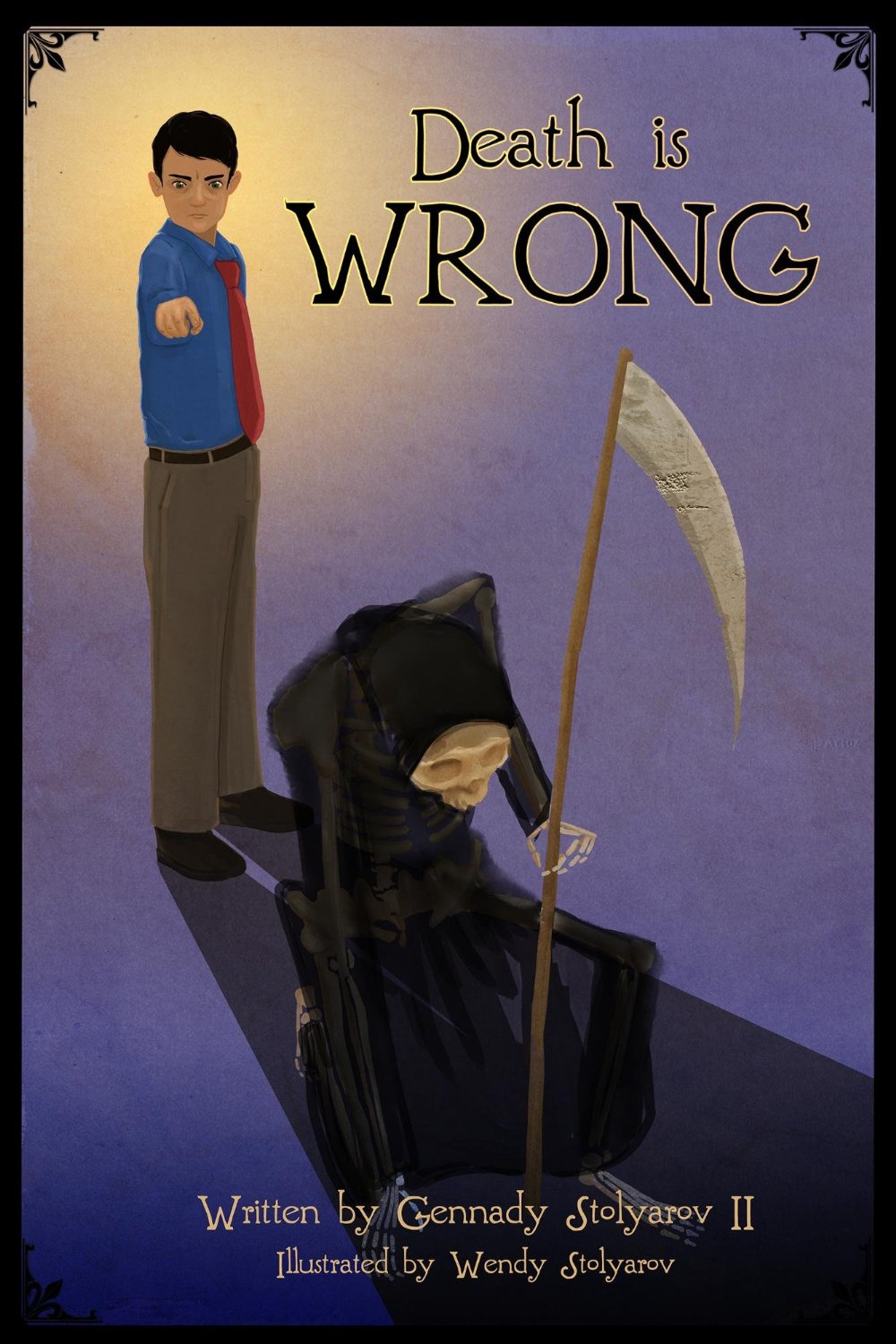 Death is Wrong – available in both paperback and Kindle editions – fills an important void. Virtually everyone learns about death as a child, and the initial reaction is the correct one: bewilderment, horror, and outrage. Yet there has been no resource to validate these completely correct first impressions. Almost immediately, the young ones are met with excuses and rationalizations, so that they might be consoled and return to a semblance of normalcy. Over millennia of facing indeed inevitable demises, humans have constructed elaborate edifices of rationalization, designed to keep thoughts of death from intruding upon their day-to-day lives. While understandable in eras when technological progress could not have been expected to attain radical life extension (see Benjamin Franklin’s famous lament that he was born too soon), today such evasions of the grave wrong of death are among the most counterproductive attitudes imaginable. Now that technological progress could bring us into the bright age of indefinite longevity within our lifetimes, every atavistic remnant of the old death acceptance poses a barrier that must be surmounted. The fewer barriers life-extension progress encounters, the faster indefinite lifespans will arrive for us; the more of us will be preserved from oblivion.

While transhumanists and life-extension advocates have made headway with conveying their aspirations for the future to some of the most technically educated and philosophically inclined adults, the mainstream of society remains pervaded by the old death-acceptance arguments – religious and secular: from the fear of “playing God” to the specter of overpopulation. Every mind held captive by these traditional and Malthusian pro-death prejudices is a mind that will at best not help life-extension progress and at worst hinder it greatly – a higher likelihood for the most intelligent purveyors of the death-acceptance mindset. People who embrace these notions and find them credible (despite the relative ease of debunking them using logic and evidence) largely do so because the fallacies were ingrained into them since childhood, with no counterarguments being presented or even posited as conceivable. So, if the antidote to these fallacies is to be most effective, it must be administered in childhood.

Death is Wrong will be easily understood by most eight-year-olds, though my aim is to encompass as young an audience as possible. The beautiful and detailed illustrations will help keep young minds engaged as they read about long-lived organisms found in nature, as well as the great advocates of life extension from the past and the present (featured in the book are Francis Bacon, Benjamin Franklin, Marquis de Condorcet, Friedrich Nietzsche, Alan Harrington, and Aubrey de Grey). The book discusses successes in animal life extension, along with providing a concise introduction to Dr. de Grey’s SENS program and the seven principal types of damage that must be addressed in order to reverse senescence. Parts of the book are autobiographical: they describe my own experiences as a child finding out about death and vowing to combat it. The book also focuses of refuting the common pro-death rationalizations and presenting young readers with all of the amazing opportunities and possibilities that can only exist if humans live much, much longer than is presently the case. At the end is a call to action and a list of further resources for young readers to find out more and to become involved with the life-extension movement.

Some may question my tactic of assailing death itself directly – an approach that strikes at the very attitudes enabling acceptance of the Dragon-Tyrant in the room (not the elephant, because elephants are largely innocuous). Yet this is not the time for prevarication or for dampening the rhetoric to the point where one only advocates greater “healthspans” or “compression of morbidity” or any incremental stopping place for progress. While the achievement of indefinite lifespans (and functional immortality, through improvements to the safety of humans’ environment and to the institutional incentives to avoid violence) will not come all at once, and incremental discoveries and lifespan extensions will certainly be the process leading to the goal, the goal itself – defeating death – should not be forgotten or dismissed. The grave wrong of death is worse than that of slavery – once a ubiquitous institution that every society took for granted. William Lloyd Garrison, the 19th-century abolitionist, recognized that the way to get slavery to disappear was to emphasize the feasibility and desirability of its complete eradication: “Urge immediate abolition as earnestly as we may, it will, alas! be gradual abolition in the end. We have never said that slavery would be overthrown by a single blow; that it ought to be, we shall always contend.” [1] Truer words were never spoken when it comes to the abolition of innocent human death. For those of us life-extension advocates who cannot participate in the research directly (other than donating money and other services to aid the researchers), the most promising path to follow is the example of William Lloyd Garrison. We should emphasize the urgency, the moral necessity, the undeniable justice of abolishing the death of innocent humans as soon as possible. We need to transform the culture so that it comes to reject death much as it was transformed to reject slavery after millennia of blithe acceptance. Then the research funding will flow, the votes and political rhetoric will follow, and even theologies and philosophies will be reinterpreted to view the fight against death on Earth to be the natural conclusion of every religious faith and secular ideology.

The spread of Death is Wrong to children is just one piece of the strategy of advocating for the abolition of the death of innocents. I would admire and embrace every activist project – including other children’s books – aimed toward this same cultural transformation. For those who have been wondering how they personally could contribute to the prospects of achieving indefinite longevity within our lifetimes, I hope that this book offers inspiration as well as some concrete possibilities for action. Even a single pro-longevity activist in a community could make a tremendous difference by donating copies of Death is Wrong to libraries, schools, bookstores, and children’s activity groups – or directly to children with whom the activist is acquainted.

Perhaps, if enough of today’s children read Death is Wrong, they would not view us life-extension advocates as hopeless oldsters lost in unattainable fantasy, thirty-two years into the future. Rather, they would be young alongside us, working to build a human civilization truly worthy of the name – one that is permeated by peace, prosperity, virtue, and a striving to ceaselessly progress as humankind comes to inhabit, develop, beautify, and ennoble the universe at large.

One thought on “Why I Wrote a Children’s Book on Indefinite Life Extension – Article by G. Stolyarov II”