On February 13, 2019, Gennady Stolyarov II, Chairman of the U.S. Transhumanist Party / Transhuman Party, spoke to the Young Americans for Liberty Chapter at the University of Nevada, Reno (UNR) in a wide-ranging discussion on the intersection of technology and politics and the types of reforms that could pave the way to the new technological era of major progress and radical abundance. Watch Mr. Stolyarov’s presentation on YouTube here.

Become a member of the U.S. Transhumanist Party for free, no matter where you reside. Apply here in less than a minute.

Watch the presentation by Gennady Stolyarov II at RAAD Fest 2018, entitled, “The U.S. Transhumanist Party: Four Years of Advocating for the Future”. 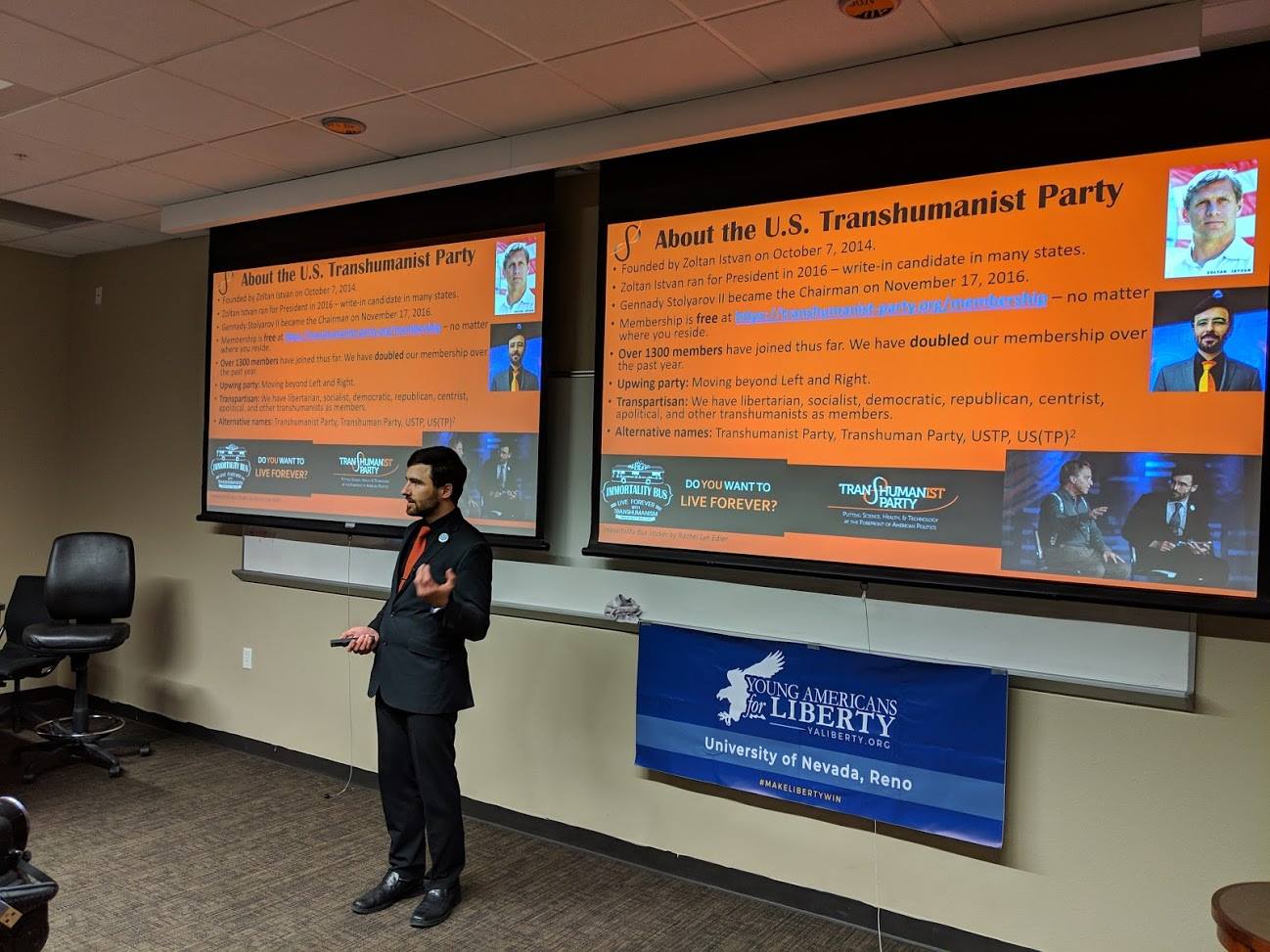 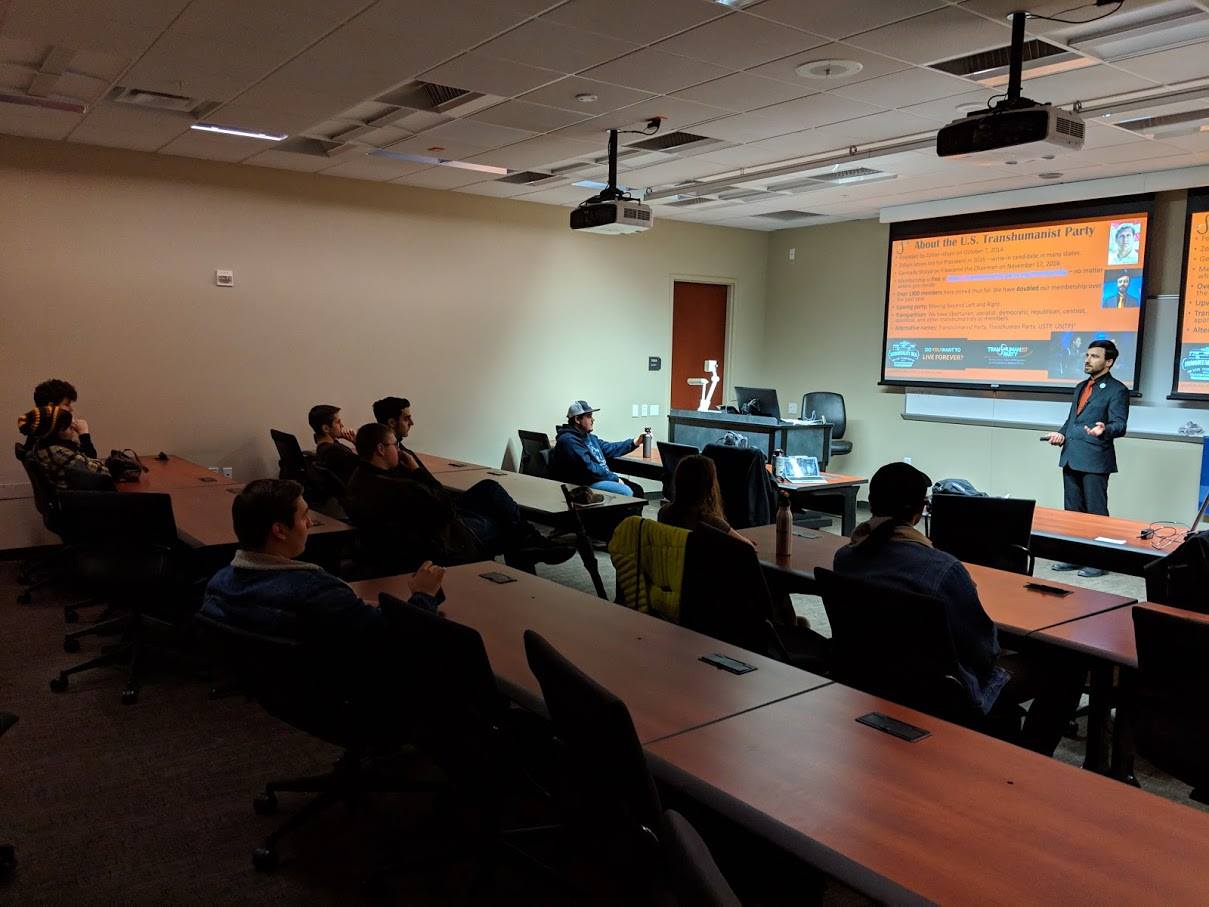 Early September 2012 marked the conclusion of the grand taxpayer-funded spectacles known as the national party conventions.  It is perhaps very telling that while $18 million in tax dollars was granted to each party for these lavish ordeals, an additional $50 million each was needed for security in anticipation of the inevitable protests at each event.  This amounts to a total of $136 million in taxpayer funds for strictly partisan activities – a drop in the bucket relative to our disastrous fiscal situation, but disgraceful nonetheless.  Parties should fund their own parties, not the taxpayer.

At these conventions, leaders determined, or pretended to determine, who they wished to govern the nation for the next four years amidst inevitable, endless exaltations of democracy.  Yet we are not a democracy.  In fact, the founding fathers found the concept of democracy very dangerous.

Democracy is majority rule at the expense of the minority.  Our system has certain democratic elements, but the founders never mentioned democracy in the Constitution, the Bill of Rights, or the Declaration of Independence.  In fact, our most important protections are decidedly undemocratic.  For example, the First Amendment protects free speech.  It doesn’t – or shouldn’t – matter if that speech is abhorrent to 51% or even 99% of the people.  Speech is not subject to majority approval.  Under our republican form of government, the individual, the smallest of minorities, is protected from the mob.

Sadly, the constitution and its protections are respected less and less as we have quietly allowed our constitutional republic to devolve into a militarist, corporatist social democracy.  Laws are broken, quietly changed and ignored when inconvenient to those in power, while others in positions to check and balance do nothing.  The protections the founders put in place are more and more just an illusion.

This is why increasing importance is placed on the beliefs and views of the president.  The very narrow limitations on government power are clearly laid out in Article, 1 Section 8, of the Constitution.  Nowhere is there any reference to being able to force Americans to buy health insurance or face a tax/penalty, for example.  Yet this power has been claimed by the executive and astonishingly affirmed by Congress and the Supreme Court.  Because we are a constitutional republic, the mere popularity of a policy should not matter.  If it is in clear violation of the limits of government and the people still want it, a Constitutional amendment is the only appropriate way to proceed.  However, rather than going through this arduous process, the Constitution was in effect, ignored and the insurance mandate was allowed anyway.

This demonstrates how there is now a great deal of unhindered flexibility in the Oval Office to impose personal views and preferences on the country, so long as 51% of the people can be convinced to vote a certain way.  The other 49% on the other hand have much to be angry about and protest under this system.

We should not tolerate the fact that we have become a nation ruled by men, their whims and the mood of the day, and not laws.  It cannot be emphasized enough that we are a republic, not a democracy and, as such, we should insist that the framework of the Constitution be respected and boundaries set by law are not crossed by our leaders.  These legal limitations on government assure that other men do not impose their will over the individual, rather, the individual is able to govern himself.   When government is restrained, liberty thrives.

This article has been released by Dr. Paul into the public domain and may be republished by anyone in any manner.