On the first Earth Day on April 22, 1970, my high school class traveled to the Mall in D.C. to mark the occasion. Me? I skipped the trip. Instead, I stayed home to watch the crippled Apollo 13 spacecraft return to Earth. My classmates and I had different values. And in the years since, I’ve watched as some of the sub-rosa values of Earth Day have spread to pollute our culture. 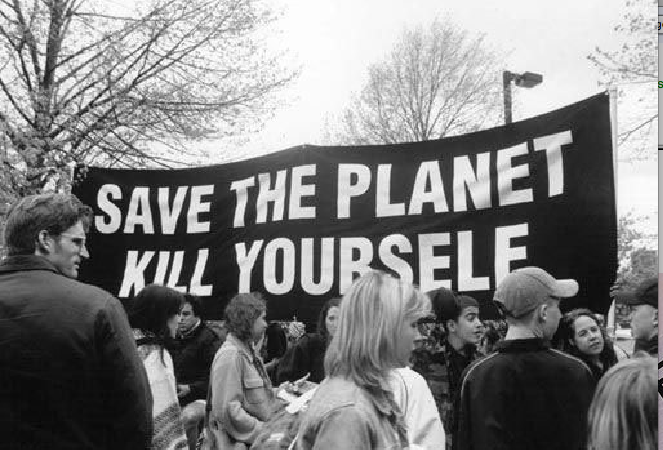 To get the obvious out of the way, it is valid to be concerned about the measurable adverse effects on human health of raw sewage, or toxic waste dumped into rivers, or poisonous factory fumes pumped out to choking lungs. But that concern has metastasized into a cultural hypochondria, a fear that everything created by humans is dangerous and, worse, is dangerous to an abstraction called “the environment” rather than to humans. What happened? For four and a half decades Earth Day has spread a form of soft indoctrination. Every year, school kids cut out little paper trees and leaves, visit recycling plants, watch Al Gore’s Earth in the Balance, and are generally asked by teachers, “What are you doing to help the environment?” Local news reporters visit the Earth Day Greenpeace booths at the town park and interview local politicos or business folks about how they are conserving the planet.
***

All value is for humans

What’s missing from this picture? Humans! Certainly the messages are mixed. Certainly there is talk about our kids living healthier lives if they are not exposed to carcinogens and the like. But the subtle shift fostered by this annual April ritual is from the material world being of value to humans to the material world being of value in and of itself.

Forests are of value to humans because we can use their trees for lumber for our houses—good for our material well-being—or walk through them to enjoy their beauty—good for our spiritual well-being. But they are not of value in and of themselves. Yet Earth Day has conditioned two generations to anthropomorphize forests, rivers, oceans, and “the environment” as entities with rights apart from us, the conscious valuers. And these two generations are now susceptible to the appeals of the environmental extremists who argue, in essence, that humans are trespassers on the planet. Thus, we see arguments for public policies that would demonstrably harm humans, especially those in less developed countries.

The value of technology and achievement

Worse, an unthinking regard for the environment blinds many to real future challenges and their only solutions. As poorer countries develop higher living standards, they will not be able to consume resources at the rate Western countries did when they were industrializing. New technologies that allow for more efficient and, as a result, less polluting ways to use resources will be essential. Technology is what created cities, skyscrapers, factories, trains, planes, cars, rockets, and most things that radical environmentalists want to curtail. Technologies are achievements of the human mind that, in turn, empower us to achieve more in our lives and in the world.

This vision of the future is already grating on those who have been poisoned by the subtle extremist message of Earth Day. But the achievements in recent decades in information technology and the emerging achievements in nanotech, biotech, and artificial intelligence are causing many young people especially to shake off the destructive Earth Day ideology. These individuals understand not only that technology will help us meet true challenges to human well-being. They also appreciate that human well-being is the standard of value.

Let’s hope that in the future Earth Day is superseded by Human Achievement Day!