California has the highest poverty rate in the U.S. and is rated dead last in quality of life.

In July, the mayor of San Francisco frankly stated that poverty in the city is so bad, that “there is more feces on the sidewalks than I’ve ever seen.” And it’s not just her – the local NBC investigative unit found a “dangerous mix of drug needles, garbage, and feces throughout downtown San Francisco.”

While such conditions are thankfully not widespread, California still has the highest rate of poverty of any state when factoring in living costs and is rated dead last for quality of life. It’s no wonder that from 2007 to 2016, California lost a million residents on net to domestic migration.

This plight may appear counterintuitive since California’s economy is booming. If the state were an independent country, its economy would rank as the 5th largest in the world. However, a high GDP does not necessarily entail socioeconomic wellbeing.

So, what’s the main problem ailing California and creating such a high cost of living?

How bad are housing costs? The median price of a home in California is over $600,000 (compared with $300,000 nationally) and a recent study found that:

“Across California, more than 4 in 10 households had unaffordable housing costs, exceeding 30 percent of household income, in 2015. More than 1 in 5 households statewide faced severe housing cost burdens, spending more than half of their income toward housing expenses.”

Housing costs are so high that in San Francisco and San Mateo counties the government considers a household of four making $105,350 as “low income”.

And it’s not just low and middle-income families that are suffering – even many “elite” technology workers can barely make ends meet. Lucrative six-figure salaries don’t go far when you live in the most expensive housing markets in America while also paying some of the highest taxes.

You can save money by living in the suburbs, but multi-hour commutes in soul-crushing traffic may await. Is such an arrangement worth it? Many have said “no” and moved to other states. While their new jobs elsewhere might pay less, other benefits more than make up for it.

But why is the housing situation in California so terrible?

It’s easy to simply say “supply and demand” – so many people have moved to cities that housing construction can’t keep up, causing real estate prices and rents to skyrocket.

However, this invites an important question: why can’t residential developers build fast enough? 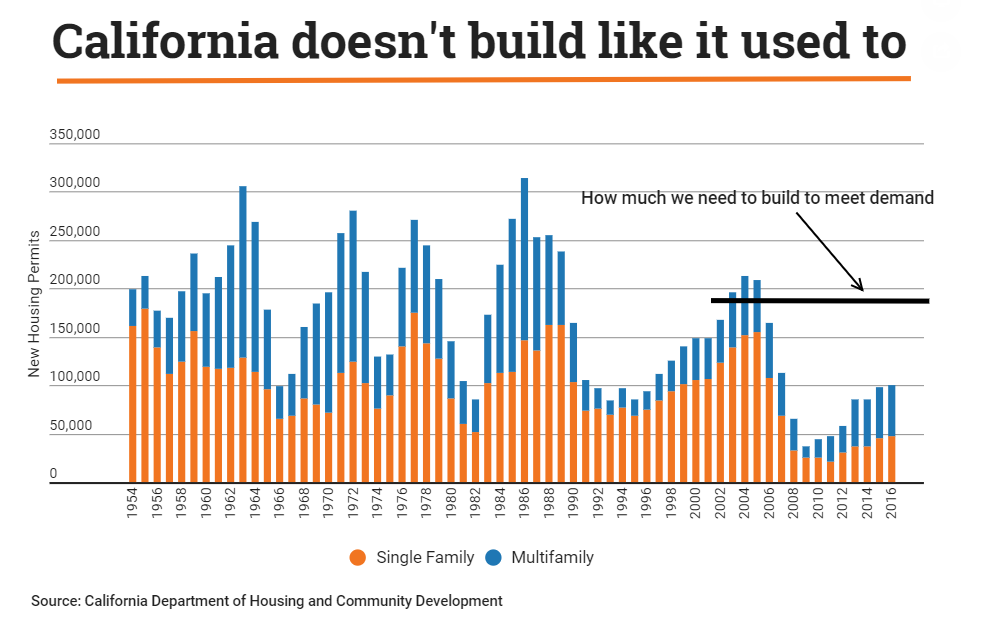 Regulations play an especially large role in the San Francisco Bay Area, which shockingly includes 15 of the 30 cities with the highest rents in the country. One article explains these struggles well:

Then there are also chances for your neighbors to appeal your permit on either an entitlement or environmental basis. The city also requires extensive public notice of proposed projects even if they already meet neighborhood plans, which have taken several years of deliberation to produce. Neighbors can appeal your project for something as insignificant as the shade of paint. . .

If those fail, neighborhood groups can also file a CEQA or environmental lawsuit under California state law, challenging the environment impact of the project. . .

Then if that fails, opponents can put a development directly on a citywide ballot with enough signatures. . . That’s what happened with the controversial 8 Washington luxury condo project last November even though it had already gone through eight years of deliberation.

These barriers add unpredictable costs and years of delays for every developer, which are ultimately passed onto buyers and renters. It also means that developers have problems attracting capital financing in weaker economic years because of the political uncertainty around getting a project passed.”

Why aren’t politicians working to fix this? Self-preservation. Here’s the unfortunate reality:

“The reason the San Francisco city government won’t fix things that seem obvious . . . is because it fears a backlash from the hundreds of neighborhood associations that blanket the city and can reliably turn people out to the polls.”

This cultural opposition to development is not a modern phenomenon:

“San Francisco’s orientation towards growth control has 50 years of history behind it and more than 80 percent of the city’s housing stock is either owner-occupied or rent controlled. The city’s height limits, its rent control and its formidable permitting process are all products of tenant, environmental and preservationist movements that have arisen and fallen over decades.”

Development proposals have been shot down for reasons ranging from burrowing owl protection to complaints that the size of new residential buildings will block sunshine and thereby “devalue human life”.

The power of this “Not In My Back Yard” (NIMBY) movement has been considerable, but counter-movements are growing. When one homeowner recently complained in a Berkeley city council meeting that a proposed residential building would block sunshine for her zucchini garden, one young woman angrily responded: “You’re talking about zucchinis? Really? Because I’m struggling to pay rent.” Young workers facing unaffordable rents are increasingly fed up with petty opposition to more affordable housing. 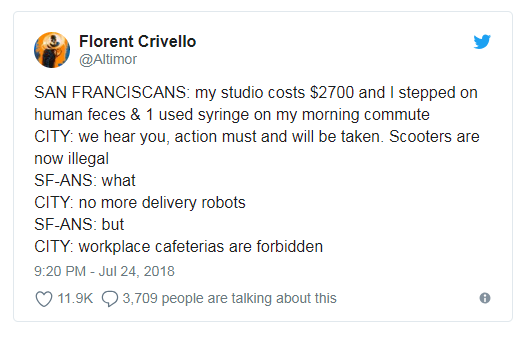 Even when politicians try to help, they frequently ignore the root causes of the issue. For example, California Representative Kamala Harris recently proposed a bill called the “Rent Relief Act” that would provide a tax credit for people spending over 30 percent of their income on rent.

Harris’ proposal only addresses symptoms of an underlying disease and would almost certainly be counterproductive. It doesn’t encourage more housing construction, which is the only real solution.

Until sweeping housing reform to enable residential development is passed at the state and local levels, Californians will keep fleeing to Texas, Nevada, and Arizona. I don’t blame them.

Andrew Berryhill is an Alcuin Fellow at Intellectual Takeout and a rising senior at Hillsdale College majoring in economics. Andrew has interned on Capitol Hill and was a research fellow for Hillsdale’s economics department. In his spare time, he enjoys practicing the violin and playing golf.

This post (“Why California Cities Are Becoming Unlivable“) was originally published on Intellectual Takeout by Andrew Berryhill.

“Buy land — they’re not making any more!” is an old investing chestnut, and a common sense one to boot. Economically, it’s also completely false.

As counterintuitive as it may seem, we make land all the time. It just doesn’t look like land.

Why? Because land’s value doesn’t come from its ability to cover up the naked earth. Land’s value comes from its economic usefulness. From the value of things that can be done using that land (Rothbard’s “marginal revenue product” of the land). And that value is, indeed, changing all the time. Economically, from a price perspective, then, we make land all the time.

Step back a moment and ask why land has value anyway. Why do people want land? Well, obviously, because you can put stuff there — including yourself — plus buildings, swimming pools, and factories.

Now, anybody who’s visited West Texas knows there is plenty of building space in the world. You could drive for hours and meet nobody. There’s lots of space for that factory of yours. But it’s not really space itself that makes land valuable. It’s location. As in, there’s only so much room in Manhattan. Or Central London.

Once again, though, it’s not the actual space that matters. It’s the access. Put a strip mall on Manhattan surrounded by crocodile-filled moats and snipers and it will have low value. The value is in access. So Manhattan is valuable because it’s easy to get to other parts of Manhattan. And it’s easy for other people to get to you. Customers, partners, and friends can all easily visit you if your apartment or office is in Manhattan, moatless and sniperless.

So if it’s the access that matters, are they making new access? Of course. They’re doing it all the time.

What are some of the meta-trends on land as investment, then?

First: roads. This was a bigger value-driver a generation ago in the US, as new roads made the suburbs more accessible, helping to drain many cities even as US population grew. Outside the US (Mexico, Thailand, Russia), new roads are still a big deal, and even in the US, new highways can reshape values — draining old neighborhoods and building value in new ones. The decline of cities like Baltimore or Detroit are partly thanks to those beautiful roads that redistribute access to the suburbs.

Second: population. In the US “rust belt” of declining manufacturing, many regions have dropped in price simply because people are leaving. Detroit homes for $100 is emblematic, although of course there are also political reasons some cities are so cheap — in particular, taxes and crime.

And that brings us to politics. Real estate can be cheapened shockingly quickly by taxes and crime, and those traditional drivers have been joined in recent decades by environmental politics.

Environmentalists, by taking land off the market, effectively squeeze the remaining accessible locations, driving up the price. Regions like Seattle or San Francisco are poster children of this environmental squeeze, with modest homes even in remote suburbs costing upward of a million dollars. On the other extreme, cities like Dallas or Houston have kept prices down despite exploding populations by allowing farmland to be converted to residential, commercial, or industrial use.

Beyond the access and political angles, land is also vulnerable to “network effects.” In other words, the neighbors matter. Gentrification or urban decay can be hard to predict. Even in a compact city with rising population like Washington, DC, it can be hard to predict where the middle class or rich want to colonize, and where they want to flee.

There are clues, of course — in large US cities, gays moving into a neighborhood, new coffee shops or art galleries are some leading indicators that property prices might swing up. But gentrification has it’s own mind; even in a booming city it might go into some other neighborhood. New York’s Harlem or Silicon Valley’s East Palo Alto are two very accessible locations with low prices because of perceptions of the neighbors.

So, while they’re not “making” land, they are constantly making things that affect land price: access, regulations, changing neighbors. These are the kinds of factors that make land valuable, not it’s ability to cover the earth.

And so land comes back to earth, joining boring old commodities like wheat or copper. Just as vulnerable to changing supply and demand factors.

And if you are looking for something they’re not “making more of?” Well, gold does come close – hence its appeal. They do mine new gold all the time, but the costs are high enough that gold is a very “inelastic” commodity. It comes close to “they’re not making more.”

Beyond that? Develop your ultimate resource: yourself.

Peter St. Onge is an assistant professor at Taiwan’s Fengjia University College of Business. He blogs at Profits of Chaos.
***
This article was published on Mises.org and may be freely distributed, subject to a Creative Commons Attribution United States License, which requires that credit be given to the author.