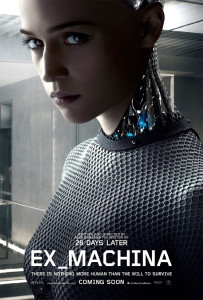 How will we know if an artificial intelligence actually attains a human level of consciousness?

As work in robotics and merging man and machine accelerates, we can expect more movies on this theme. Some, like Transcendence, will be dystopian warnings of potential dangers. Others, like Ex Machina, elicit serious thought about what it is to be human. Combining a good story and good acting, Ex Machina should interest technophiles and humanists alike.

The film opens on Caleb Smith (Domhnall Gleeson) , a 27-year-old programmer at uber-search engine company Blue Book, who wins a lottery to spend a week at the isolated mountain home of the company’s reclusive genius creator, Nathan Bateman (Oscar Isaac). But the hard-drinking, eccentric Nathan tells Caleb that they’re not only going to hang out and get drunk.

He has created an android AI named Ava (Alicia Vikander) with a mostly woman-like, but part robot-like, appearance. The woman part is quite attractive. Nathan wants Caleb to spend the week administering the Turing Test to determine whether the AI shows intelligent behavior indistinguishable from that of a human. Normally this test is administered so the tester cannot see whether he’s dealing with a human and or machine. The test consists of exchanges of questions and answers, and is usually done in some written form. Since Caleb already knows Ava is an AI, he really needs to be convinced in his daily sessions with her, reviewed each evening with Nathan, that Nathan has created, in essence, a sentient, self-conscious human. It’s a high bar.

Ava is kept locked in a room where her behavior can be monitored 24/7. Caleb talks to her through a glass, and at first he asks standard questions any good techie would ask to determine if she is human or machine. But soon Ava is showing a clear attraction to Caleb. The feeling is mutual.

In another session Ava is turning the tables. She wants to know about Caleb and be his friend. But during one of the temporary power outages that seems to plague Nathan’s house, when the monitoring devices are off, Ava tells Caleb that Nathan is not his friend and not to trust him. When the power comes back on, Ava reverts to chatting about getting to know Caleb.

In another session, when Ava reveals she’s never allowed out of the room, Caleb asks where she would choose to go if she could leave. She says to a busy traffic intersection. To people watch! Curiosity about humanity!

Ava then asks Caleb to close his eyes and she puts on a dress and wig to cover her robot parts. She looks fully human. She says she’d wear this if they went on a date. Nathan later explains that he gave Ava gender since no human is without one. That is part of human consciousness. Nathan also explains that he did not program her specifically to like Caleb. And he explains that she is fully sexually functional.

A human form of awareness

In another session Caleb tells Ava what she certainly suspects, that he is testing her. To communicate what he’s looking for, he offers the “Mary in a Black and White Room” thought experiment. Mary has always lived in a room with no colors. All views of the outside world are through black and white monitors. But she understands everything about the physics of color and about how the human eyes and brain process color. But does she really “know” or “understand” color—the “qualia”—until she walks outside and actually sees the blue sky?

Ava is concerned with what will happen if she does not pass the Turing test. Nathan later tells Caleb that he thinks the AI after Ava will be the one he’s aiming for. And what will happen to Ava? The program will be downloaded and the memories erased. Caleb understands that this means Ava’s death.

During a blackout, this one of Nathan in a drunken stupor, Caleb borrows Nathan’s passcard to access closed rooms, and he discovers some disturbing truths about what proceeded Ava and led to her creation.

In the next session, during a power outage, Ava and Caleb plan an escape from the facility. They plan to get Nathan drunk, change the lock codes on the doors, and get out at the next power outage.

But has Nathan caught on? On the day Caleb is scheduled to leave he tells Nathan that Ava has passed the Turing Test. But Nathan asks whether Caleb thinks Ava is just pretending to like Caleb in order to escape. If so, this would show human intelligence and would mean that Ava indeed has passed the test.

But who is testing and manipulating whom and to what end? The story takes a dramatic, shocking turn as the audience finds out who sees through whose lies and deceptions. Does Mary ever escape from the black and white room? Is Ava really conscious like a human?

What it means to be human

But to be human is also to be aware that others might block one from pursuing human goals, that others can be cruel, and they can lie and deceive. There is the recognition that one might need to use the same behavior in order to be human.

If thinkers like Singularity theorist Ray Kurzweil are right, AIs might be passing the Turing Test within a few decades. But even if they don’t, humans will more and more rely on technologies that could enhance our minds and capacities and extend our lives. As we do so, it will be even more important that we keep in mind what it is to be human and what is best about being human. Ex Machina will not only provide you with an entertaining evening at the movies; it will also help you use that very human capacity, the imagination, to prepare your mind to meet these challenges.