I know this election has been painful for you. Many feel betrayed and even believe yourselves no longer living in the country you thought you were. Reflect on that pain and frustration for a moment. Now recognize how you feel now is how an equally large, possibly larger, number felt for the past eight years. Those who are of a liberty bent feel it all the time, no matter who ends up in office. Reflect on it, feel it, understand it, own it.

Before you get the wrong idea, this is not my attempt at rubbing in your face the loss of your candidate or an endorsement of President-elect Donald Trump. If anything, I share your pain and frustration, just for an entirely different reason. What you’re feeling, this hopelessness, this feeling that you’re no longer represented, this feeling that people other than you are now able to dictate your way of life, this is all a result of the massive expansion of the Federal government. Elections have long ceased being voting for someone you think represents the lifestyle you want to live and are, in practice, an exercise on determining whether or not you get to impose your preferred lifestyle on someone else.

This is the nature of elections, especially the “first past the post” method utilized in the United States. This system is, by its nature, one where one group of people enjoys the ability to effectively dictate to those who did not win how they will be living their lives over the next term period. The effect of this on voter frustration, which manifests as cultural divisiveness, only gets magnified the more powerful that government becomes. A weak federal government would produce little divisiveness because there is little to be divided over. A strong Federal government would produce significant divisiveness since there is much to be divided over. It also goes to say that an absolute government would create absolute division while the absence of government would not produce a division because there isn’t any risk of having your life dictated by distant populations. When we add in factors of geographic distance and cultural diversity, we end up with a horrible mud-slinging process where people actively dislike both candidates and the electorate openly attacks one another over the political process, completing the division process. These issues won’t go away with vague calls of being civil, coming together or getting along. One group or another will always feel put out and ignored since those in office only truly represent those that got them elected.

However, you need not despair. The liberty movement has the answers you seek to not only distance yourself from future risk of being dictated to by distant populations and political heartache but also be able to more quickly and nimbly get policies and lifestyles you prefer without having to fight someone else for it.

Nothing Obama signed into law or created through regulatory diktat had to be done at the national level. Not the Affordable Care Act. Not raising minimum wages. Not identifying tax rates. Not regulatory agencies. Not even food stamps and various other welfare programs. None of it has to be done in Washington DC. All of it can be done at your State level and even locally. To prove a point, Colorado had an opportunity to form the nation’s first European-style single-payer health care system. Had that referendum passed, residents of Colorado could have been able to copy the Canadian model of medical care delivery. And it would have been entirely legal and done so without having to collect the opinions of 320 million people or impose it on residents of other States that would not have wanted it.

However, as noted in the linked article, the referendum was opposed on grounds that it could not be sufficiently paid for. This is not because of the common argument that the entire nation needs to be tapped to afford it. Colorado is wealthier than the national average, so Colorado would realistically end up having to pay residents of other States if such a scheme went national. So why is this law fiscally impossible in today’s environment? It is mainly because the Federal government is already taking all those resources for itself.

On average, the Federal government consumes 50 percent of all the taxes paid in this country. This means that, if the average holds for Colorado, and the State is likely further disadvantaged because of the higher income bracket, residents are sending $1 in taxes to the federal government for every $1 in taxes that are collected from them that go to the State or Local governments. In other words, Colorado residents have no say in how half their tax resources are used. Worse, Colorado residents would likely do a better job administering the exact same programs and do so for less because most Federal programs do little more than return the money back to equivalent State agencies. This means your State is having to cover the overhead of 2.7 million Federal employees whose sole purpose is to take money from your State then give it back again with orders on how to spend it.

By eliminating these programs wholesale on a national level and utilizing your existing State systems, you can avoid any disruptions in the programs and also enjoy a less expensive process. Instead of the Federal government collecting its pound of flesh, you will send it to your State capital. This not only allows you to continue the policies and even amend and adjust them more readily without having to convince up to 59 other Senators, hundreds of House representatives and a sitting president, along with an unknown and distant bureaucracy. All you need to do is ask your State representative, who is probably far more available to talk to than the senator you send to DC. With an added bonus, the people living the next State over aren’t going to feel threatened by your political philosophy because they are safe knowing that whatever system you decide to live under does not apply to them if they so choose not to.

We can find that, at minimum, save for a couple of orphans in the form of New Mexico, Denver, Minneapolis, and Chicago, the United States as it stands is perfectly set up for a secession movement to split the nation into at least three separate entities.

This would allow a greater level of freedom for residents of these three newly formed entities. Further, this split is more than possible from economic size. For the purposes of this exercise, I’ll name the three new nations Cascadia (Washington, Oregon, California, Nevada and let’s throw Hawaii in there), New England (all the blue colored States from Virginia through Maine), and the United States (everyone else). If the USA split into these three entities, here is how the top 20 nations by GDP would look: 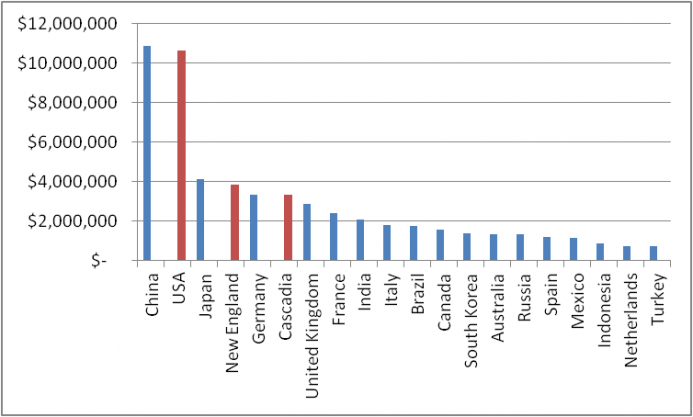 These new nations would rank second, fourth and sixth in world GDP and two of them, USA and Cascadia, are one decent year of growth away from jumping up a rank.

An additional benefit of secession is the ability to further harmonize the new nation with more desirable trade practices, immigration policy, foreign policy, military spending, court systems, and monetary policy. These decentralized entities even have the option of altering how the government itself works, such as dispensing with individual State identities, removing the Electoral College and applying a direct vote system or even converting into a European-style Parliamentary system. Secession allows for even greater self-determination missing in today’s system.

Or you could continue operating as-is and hope enough swing voters decide they want to go back to your philosophy so you can take your turn again imposing your lifestyle on someone else and taking the risk of playing backseat where you truly have no representation or real say in how you live.

In any case, the liberty movement can be a strong ally to allow you to avoid having to live through another Donald Trump term and forge your own destiny without all the strife and divisiveness that goes with a modern American election cycle.

Justin Murray received his MBA in 2014 from the University of St. Gallen in Switzerland.