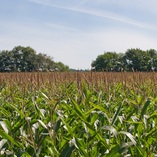 Another online petition, another misleading fear campaign. The latest to catch my eye is one from causes.com opposed to “the approval of Dow’s genetically engineered (GE) ‘Agent Orange’ corn and soybeans designed to survive repeated spraying of the toxic herbicide 2,4-D, half of the highly toxic chemical mixture Agent Orange.” Sounds scary, but a sober second look at this petition’s emotional language and sins of omission tells a different story.
***
First of all, good luck using a non-toxic herbicide to control weeds. The whole point of herbicides is that they’re toxic, but selectively so. They kill undesirable plants in order to help crops grow. Now, the petition makes it sound as if 2,4-D is toxic to humans, saying it “has been linked” to cancer and other health problems. This seems bad, but how conclusive is the evidence? Causes.com doesn’t specify, which is suspicious, and indeed, a quick glance at Wikipedia suggests “conflicting results.”
***

As for Agent Orange, just in case some people are unaware of its wicked pedigree, the petition helpfully explains that it “was the chemical defoliant used by the U.S. in Vietnam, and it caused lasting environmental damage as well as many serious medical conditions in both American veterans and the Vietnamese.” No indication, though, of the fact that those medical conditions have been attributed to the other half of Agent Orange (the 2,4,5-T component) and its contaminant, dioxin.

The petition does say that “industry tests also show that 2,4-D is contaminated with dioxins,” which is cause for concern, but again, there’s no indication of how prevalent this contamination might be. To the extent that it is a concern, though, it’s not specific to these GE crops. Why? Because 2,4-D is the world’s most widely used herbicide—something the petition also neglects to mention.

Bradley Doucet is Le Québécois Libre‘s English Editor and the author of the blog Spark This: Musings on Reason, Liberty, and Joy. A writer living in Montreal, he has studied philosophy and economics, and is currently completing a novel on the pursuit of happiness. He also writes for The New Individualist, an Objectivist magazine published by The Atlas Society, and sings.